- January 07, 2020
On Tuesday, January 7, EA has released Team of the Week for Week 16 and Week 17, two Team of the Week were both unveiled on Thursday. Due to the recent busy holiday season and Zero Chill promotion, there were none of these teams revealed in recent weeks.

The LTD player item for Week 16 is Mark Andrews and the Week 17 LTD item is Michael Gallup, featuring Heroes Saquon Barkley, Fred Warner, Joe Mixon, and Deion Jones. LTD items are both available in packs until 10 am ET on Thursday 1/9 and have quick sell values of 250,000 Mut Coins. Check out all of the latest TOTW 16 and 17 items below: 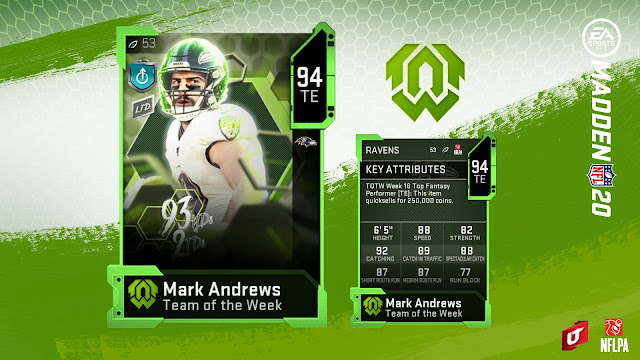 Defense
Players can purchase new Madden 20 Team of Week 16 players through the Ultimate Team Store. In addition, they will use Madden Coins to pop up messages with biding or "Buy Now" options in the auction browser. By collecting all 12 players mentioned above, the player can exchange them for the offensive hero Saquon Barkley or the defensive hero Fred Warner card. 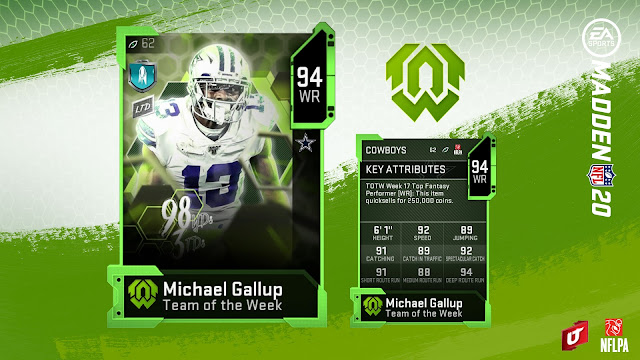 The Dallas Cowboys wide receiver, Michael Gallup, is the limited edition for Week 17. His upgrade card has a 94 OVR and key attributes such as 94 Deep Route Run, 92 Speed, 92 Spectacular Catch, 91 Catching, and 91 Short Route Run. This item can be purchased in packs until 10 AM EST (Thursday).

Similarly, with the set and bundle deals available in the Ultimate Team Store, the new Madden 20 Team of the Week 17 players can be found. In addition, they are being sold on the auction browser, and if you need cheap Mut 20 coins, you can buy them on U4gm.

In addition, each of the TOTW 16 and 17 Hero players has a new Challenge available to play. These bring Stars, Coins, a Team of the Year Token, and a free Team of the Week player card.

Below are the reward tiers for this week's challenges:
What are your thoughts on today's TOTW? Click here to see our Madden 20 news, including other ultimate team and game updates.
Madden 20 TOTW