For those who might have missed last week, a new currency (Bats) has been added to the Ultimate Team for Most Feared.  Bats can be used to buy Most Feared packs at the store, similar to training points. These packages will provide you with the Most Feared player items or the materials needed to make MF players based on their equipment. If you need to review the detail of the Bat currency, which can be viewed here. 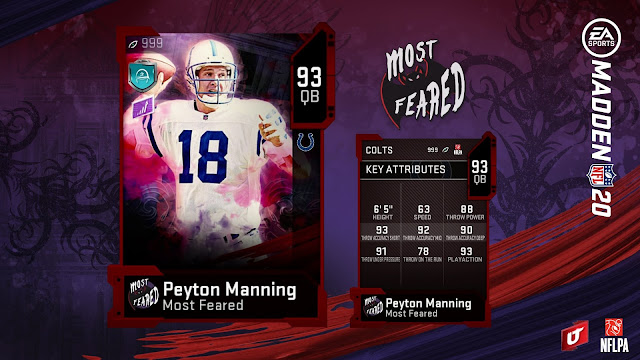 Super Bowl retired champion Peyton Manning is the top player in the second part of Madden 20 Most Feared because he is the new "Master" item in the group. Like Ray Lewis, the defensive star in the first MF player group, Manning gets 93 OVR.

63 Speed ​​is the obvious weak spot for those looking for more mobile players. However, it is difficult to “pass up” the statistics of throwing ball accuracy in the 90s. He can quickly become a complement to many rosters that seek reliable choices at QB. Here are the new Peyton cards that EA showed earlier through Power Up and attributes.

Here are all the other Most Feared Players in the second part and their requirements:


Completing the Gridiron Nightmare event rewards you with your choice of 1 NAT version of the following players (details for the event found below):


The Gridiron Nightmare is a solo event with 30 challenges where you can earn 1 Star per game along with Bat and Coin rewards. Complete all 30 challenges for your choice of a NAT Nightmare Player.


The Most Feared program will make players “enraged” from October 30th to November 1st, which means their size and ratings will increase. So, now, make sure you get the most out of freebies (such as any challenge) to get Madden 20 coins and Bats. With these, you can pick the necessary materials or other players to get a higher rating for those players in your MUT roster. See more details about the various MF part 2 players’ stats and requirements at MUTHead here.

What do you think about the second part of the Most Fearful Program? With the MUT update, get more of the latest Madden 20 news, click here.
Madden 20 Program Madden NFL 20