MUT 10: How to Get Randy Moss in Madden 20 Ultimate Team

- September 21, 2019
The Madden 20 Ultimate Team mode launched in the latest football game a few weeks ago is in its 10th-anniversary mode. This week's MUT 10th Anniversary player is Randy Moss which the best wide receiver ever and the latest to join the program. He can be found in packs now until 10 am on Monday, September 23, Eastern Time. Here's how to get new Randy Moss MUT10 Power Up and Token items in the game.

For more information on Madden 20, please visit here. If you need a refresher, click here to get an overview of the MUT 10th Anniversary Promotion.

Moss has a high-rated new LTD card. Its positive overall rating is 92, with some excellent attributes, including 92 Jumping, 92 Deep Route, 91 Speed, and 90 Catching. This is the first sight of Moss' new time-limited card. 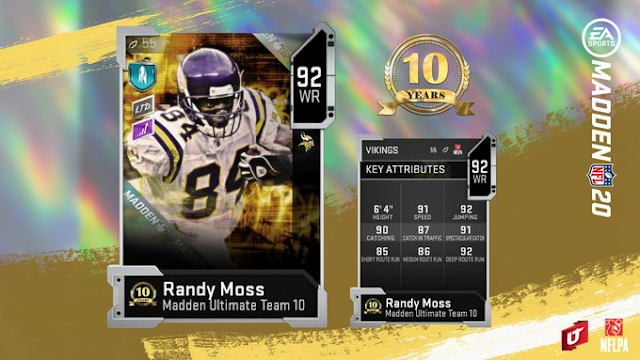 How to get Randy Moss Power Up & MUT 10 Token

Make sure to complete his Time-limited Individual Challenge before the expiration of Monday morning to get the above items, and you need to purchase packs from the Madden Ultimate Team Store and hope to get it at random. Players can also buy mut coins Madden 20 from the auction browser to get them.

On September 20th, the new MUT10 Challenge for Randy Moss was unveiled. Scroll down to " Limited Time: MUT 10" and select it. However, by earning at least three stars in the Challenge, gamers can earn collectible MUT10 tokens. This can be done by raising the difficulty level or achieving the "reward" goal listed for the challenge.

Here are the rewards for each number of Stars earned. Those Bonus goals are to score 40 or more points in the game. 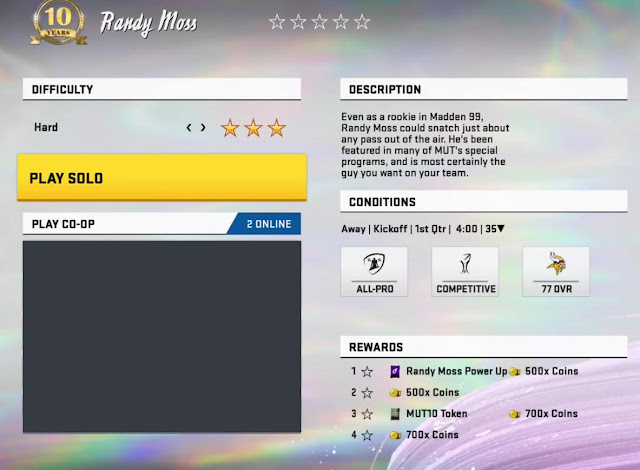 Now that we have reached halfway, let us review the people who have been released so far and the positions that have not yet appeared:

Who do you think the remaining players will be? For more of the latest Madden 20 news including Ultimate Team and other updates, please click here.
Madden 20 Guide